The weather was great this Monday - it was the hottest day of this year in Ireland (so far). Also, thanks to Memorial Day in USA, it was going to be a quiet day at work. So, I decided to take a day off and go paddle-boarding in Royal Canal in west Dublin. I did not find a lot of information online, so I'll write a report here. The Royal Canal connects Liffey and Shannon. It starts in North Docklands in Dublin, goes north-west through the city where among other places it passes through Croke Park, the bridge where the quaternion number system was invented, goes over the M50 and arrives to 12th Lock in Blanchardstown. This is where the "deep sinking" section starts - it goes between Blanchardstown and Clonsilla.

A "sinking: is a section of a canal which is cut through the land to maintain the same level so there's no need to use locks. In the "deep sinking" of Royal Canal the towpath raises up to 9 meters above the water.

I drove there and parked at the 12th Lock Hotel & Cafe car park. The car park is for hotel & cafe guests only. However "thanks" to COVID-19 they were closed, and car park was far from busy. I figured it would be ok to park there, and it was indeed ok. Alternatively it is possible to park on the road and that's probably what I would have done if they were open. Car park was busier in the afternoon and I imagine it and the surrounding roads may be packed on weekends with good weather. So I'd research alternatives. The car park is right next to 12th lock and there's a bunch of canal boats just up from the lock.

If you don't drive, the Castleknock train station is right there too.

If you go down the canal a bit you will find that it goes over the M50. But I left paddleboarding over motorway for next time and went up the canal instead.

I intended to use one of the piers to jump into water but there were boats the full length of it. So I had to carry my SUP a bit further to Granard Bridge where there was a very convenient place to start paddling.

Starting from Granard Bridge I passed more canal boats, Castleknock train station on the left and some houses with beautiful back gardens facing canal on the right.

The train line runs next to the canal and you could wave at trains passing for a while but soon they disappear behind the vegetation. The canal is very quiet and secluded. Although the canal is clearly navigable, and I saw a lot of boats moored, I did not meet any. In fact I only saw one kayaker going the other direction and had the waterway for just myself, occasionally saying hello to fishermen and folks using the greenway.

Towpath started to raise and soon I found myself in sort of a tunnel with steep stone banks on both sides. About 1 or 2 kilometres in I could hear (but not see) Coolmine train station on the left.

With practically no current and no wind it was easy going. The canal is not the cleanest - there are plenty of cans and bottles floating, and I could see occasional submerged shopping trolly. But that's expected and it wasn't too bad or gross. 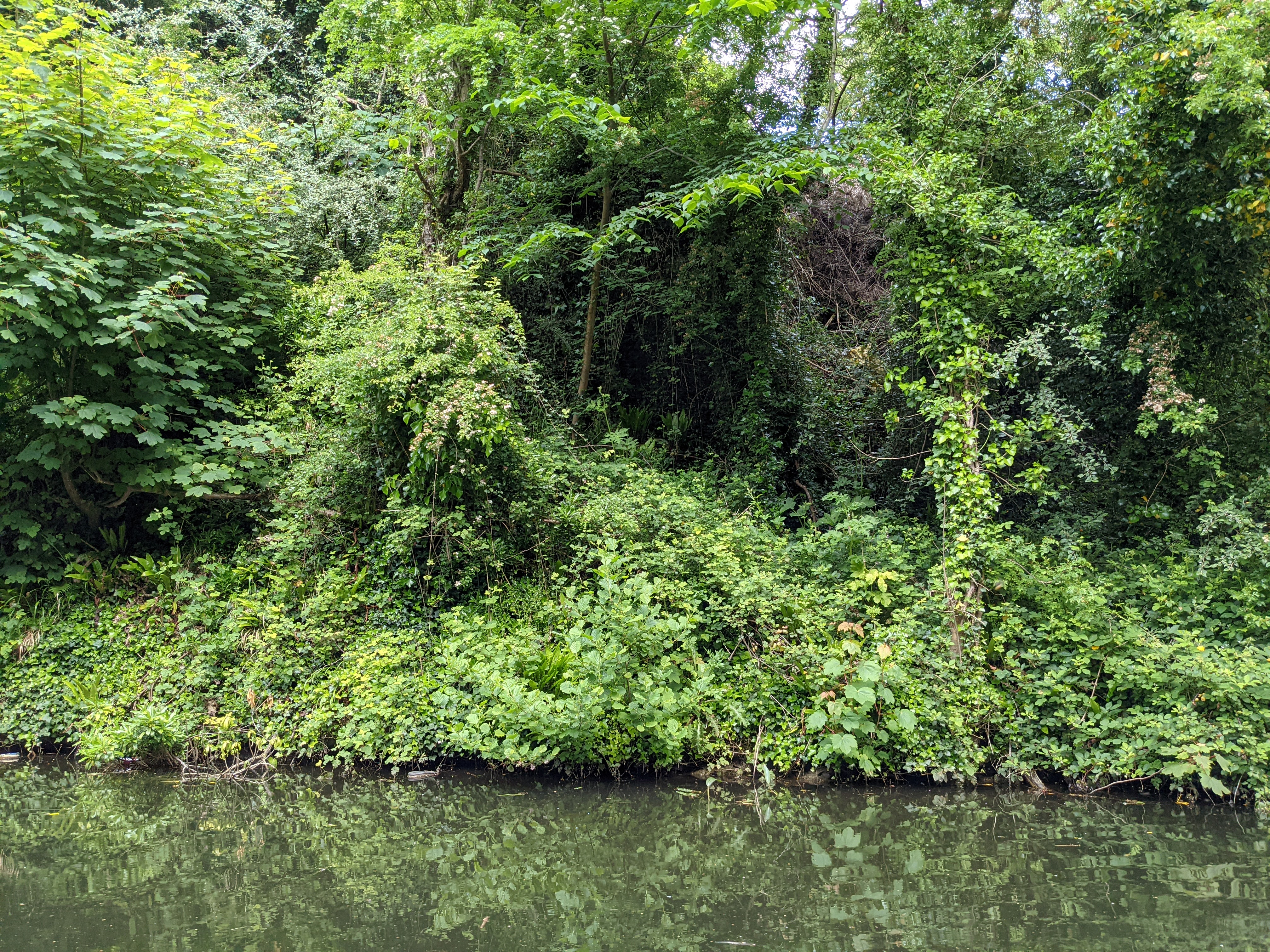 Passing under the Kirkpatrick Bridge near Coolmine station I went into probably the most interesting part of the deep sinking. Shortly after the bridge a pair of stone arches can be seen on the left. Thanks to the tip of local fishermen I was able to spot another one a bit further hidden behind vegetation (I did not took a picture of that). I'm not sure if they were used for anything other than making towpath more level. 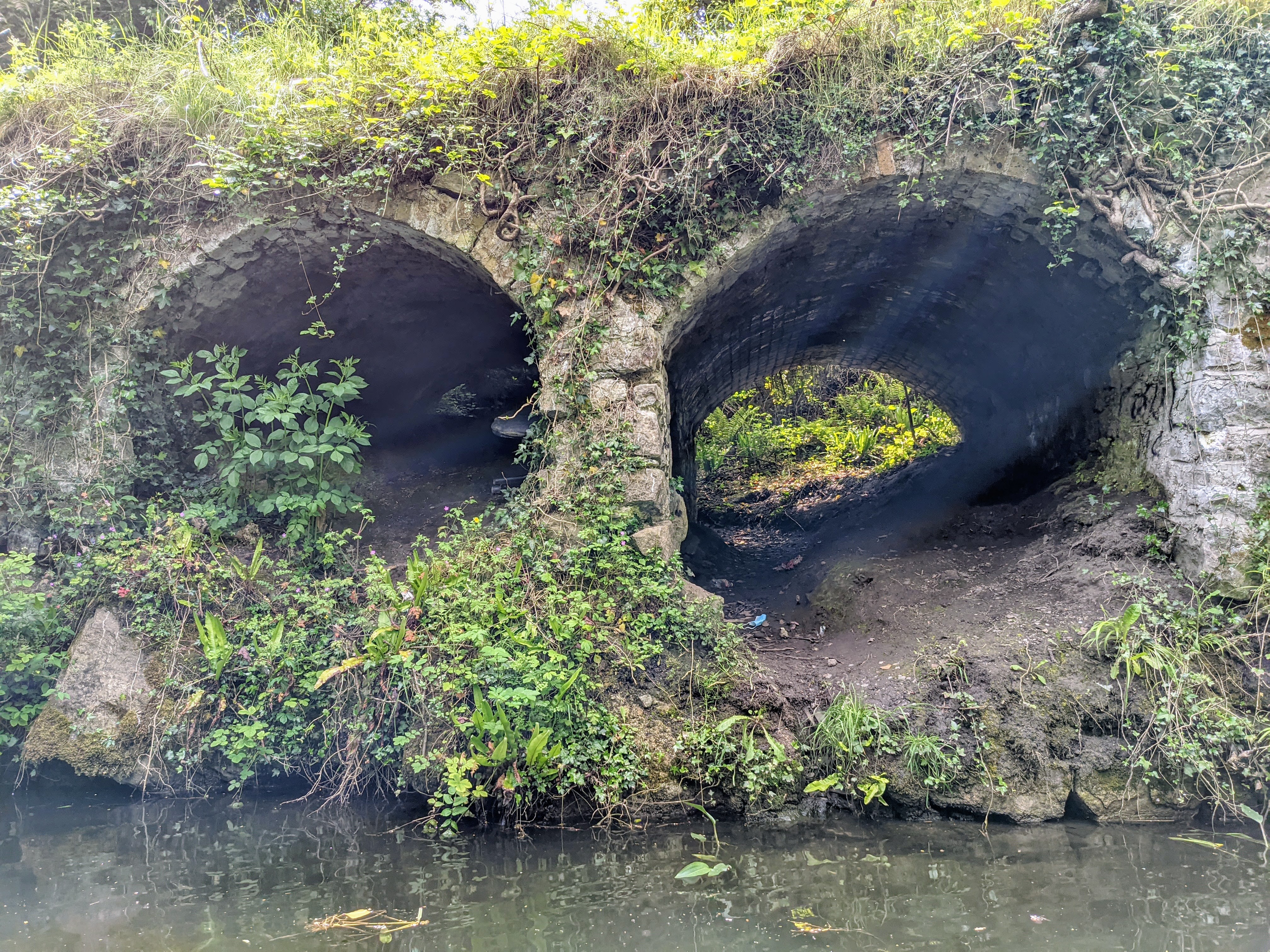 Next I passed under tall Dr. Troy Bridge, then Keenan’s Bridge. The banks slowly descend closer to canal level and slowly I was getting out of the woods into more open parts of the canal.

Reaching Callaghan bridge and Clonsilla train station, towpath became more lively with more people walking, and one curious god clearly very interested in jumping into my SUP (she managed to resist the urge). I've decided to go a bit more, going under the pipe (not sure what it's for), passed some new apartments in Ongar on the right, went under railway bridge where the line splits into two, and came to Pakenham Bridge.

This is where I decided to turn around and went back the same way. 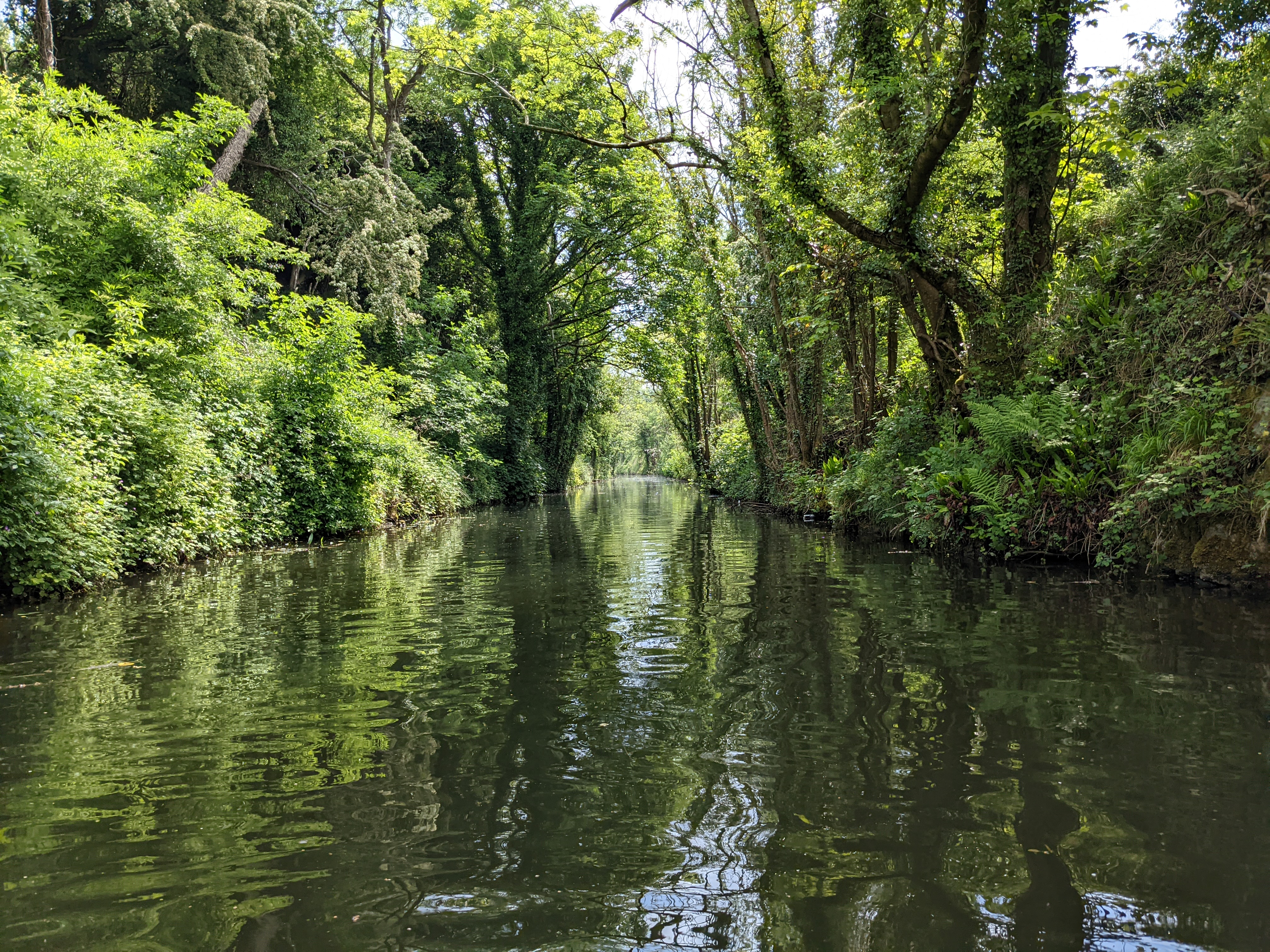 This journey was just over 10 kilometres and took a bit under 3 hours. You can find the track in my Strava. I'm not the most experienced paddle-boarder and was quite tired at the end. I'm sure someone with more experience could make it faster, but speed was not my goal.

There is no rental near 12th lock, or anywhere that I know of along the canal. I brought my own inflatable SUP - Itiwit Surf 500. It's the first SUP I actually own so I'm not sure if it's actually good or bad, but it gets the job done. It has a very convenient strap to carry SUP on the shoulder (good), and the only thing is missing is attachment for a deck bag.

It came with no pump or paddle so I got them from Decathlon as well. The pump is grand, but the paddle is not very good - quite flimsy and uncomfortable on hands. I got the cheapest one and I'll have to replace it.

I had fun relaxing time on the water, quite a bit of workout and all in all excellent day out. This was the first proper test for the SUP I got. Next time we'll get one more, better paddle, some water (not having any with me was a mistake), maybe even some sandwiches and will go explore same or maybe some other part of the canal. It's quite long and from what I heard most of it is beautiful.